All About Leadership Theories (2022 Edition) 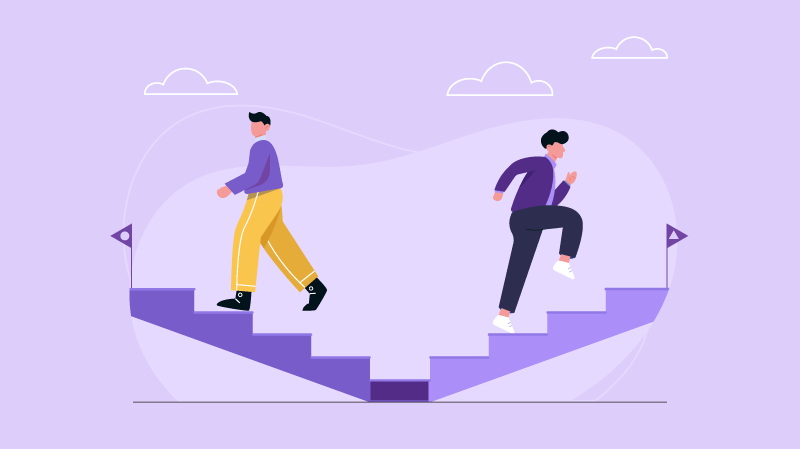 Leadership theories are based on different ways of thinking. Some focus on traits and qualities, while some emphasize the importance of situational aspects that influence effective leaders.

The human side of the business is one of the most important elements that determine the success and failure of an organization. Leadership will always remain the most valuable skill in the business world.

To be a better leader, it's important to understand human behavior.

This article will highlight some famous leadership theories, which will assist you in developing your skills. It will also help you to perform better in your workplace.

What are Leadership Theories?

Leadership theories are schools of thought. It is brought forward to explain how and why certain individuals become leaders.

Over the decades, many great scholars and researchers have conducted various studies to discover the factors that contribute to effective leadership.

These theories shed light on the traits and behaviors of a leader. It can help individuals cultivate their leadership abilities.

Without study, it’s a one-shot, lightning-in-a-bottle event. However, with a solid theory to explain how it works and harnesses it, you can use it to power your team like a well-oiled machine.

Using these leadership theories, you can analyze your leadership style. You can find out what kind of leader you are and how you can be more effective while managing your team.

People are complicated. They’re hard to understand and predict at the best of times. Leadership theories help to make things easier for you.

You can't predict how everyone will react to a given situation. But, by knowing what type of leader you are, you can take more decisive actions. Effective decisive decisions will help your team achieve its goals.

That said, here are some of the core leadership theories that you need to know to stay on top of your game.

What are the core leadership theories? 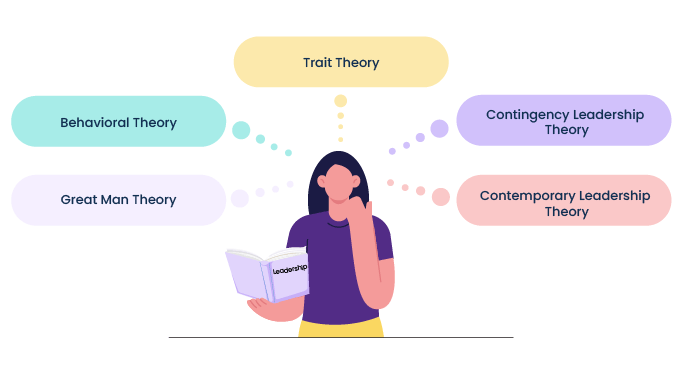 According to the Great Man Theory, leaders are born with the right traits and abilities for leading. The theory suggests that the ability to lead is inherent – that the best leaders are born, not made. 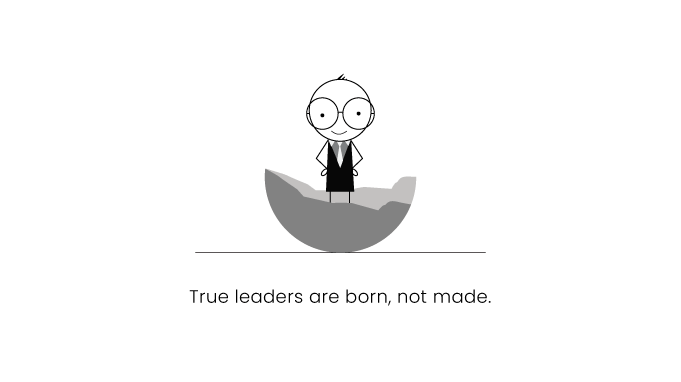 Thomas Carlyle proposed the Great Man Theory in the 1840s. This theory was criticized due to many reasons. For instance,

While the theory sounds pretty discouraging to those wanting to learn leadership, it’s still an interesting take on leadership. This theory highlights the qualities of great leaders. These qualities have more or less remained unchanged over time.

The Trait Theory is like the Great Man Theory. Ralph M. Stogdill proposed the trait theory of leadership in the late 1940s. 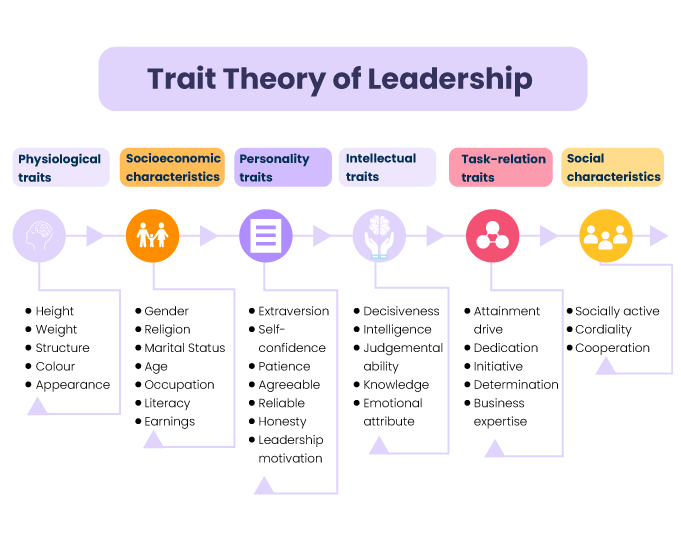 This theory was also criticized due to many reasons. For instance,

Behavioral theory focuses on the specific behaviors and actions of leaders rather than their traits or characteristics.

The behavioral theory of leadership evolved in the 1950s. The theory suggests that effective leadership is the result of many learned skills. 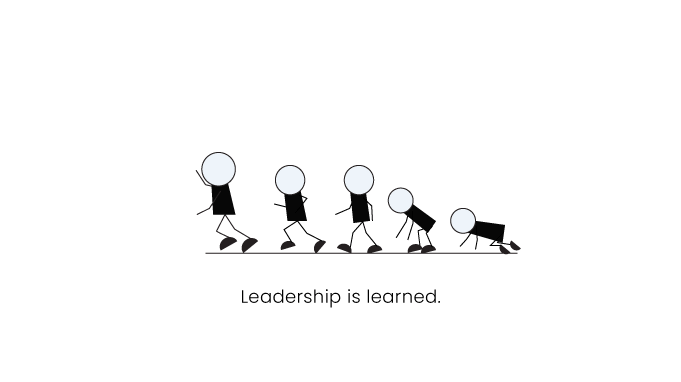 After researchers understood the effectiveness of leadership traits, they were keen to know what leaders do differently. Hence, to study the behavior of leaders, two major research programs were started by two different universities - 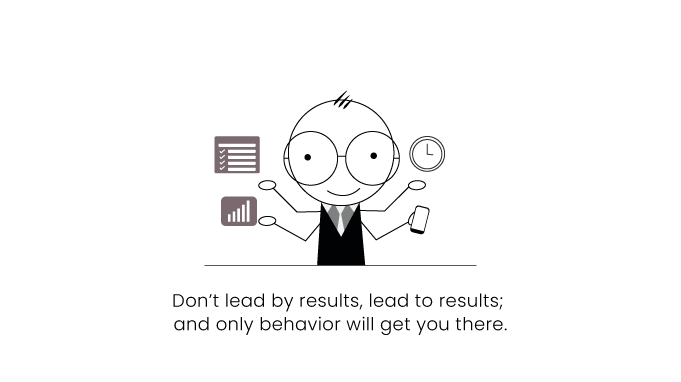 Four other behaviors are found for effective leadership:

Robert R. Blake and Jane S. Mouton developed the Managerial Grid, also called a leadership grid, to support this theory. According to them, the leadership styles are identified based on the manager’s concern for people and production.

They discovered five distinct leadership styles by categorizing the managers into 81 possible ways based on ratings.

Following are the various styles of leadership according to this model:

Contingency theory is a general theory that says there is no one singular best way to structure your organization and lead your team. According to this theory, the best leadership style will be contingent on the situation. 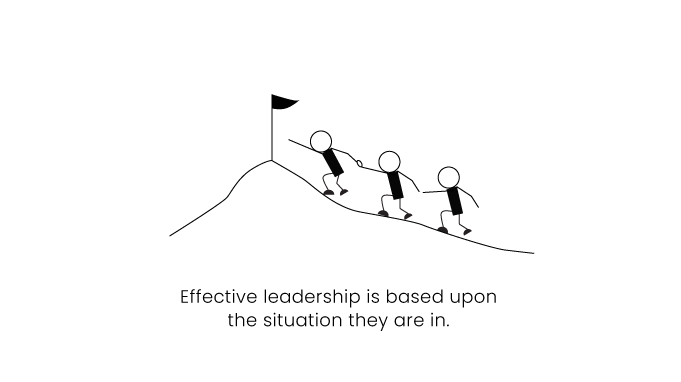 The contingency theory emphasizes different situational variables to determine the style of leadership best suited for the situation. These theories of leadership state that effective leadership comprises all three factors, i.e., traits, behavior, and situation. 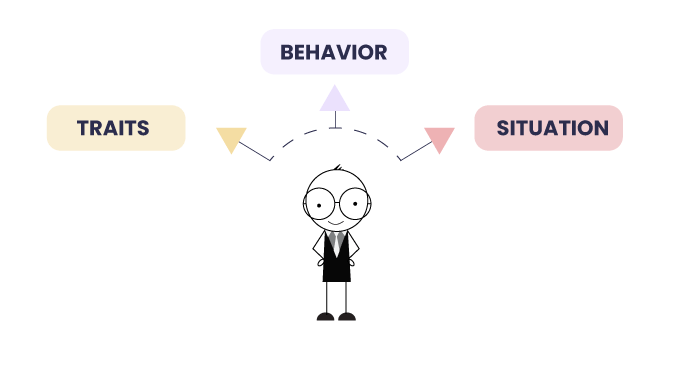 This leadership theory evolved in the 1960s and was founded on the principle that no one leadership style applies to all situations.

Good leaders not only have the right qualities, but they’re also able to evaluate the needs of their followers and the situation at hand. To support this theory, various Contingency leadership models were developed. Few such models are -

Read more about these contingency models: Contingency Leadership Theory and Its Various Models

Contemporary theory is a group of modern literary approaches to leadership. Contemporary leaders use personal influence to develop and inspire people to achieve organizational goals. 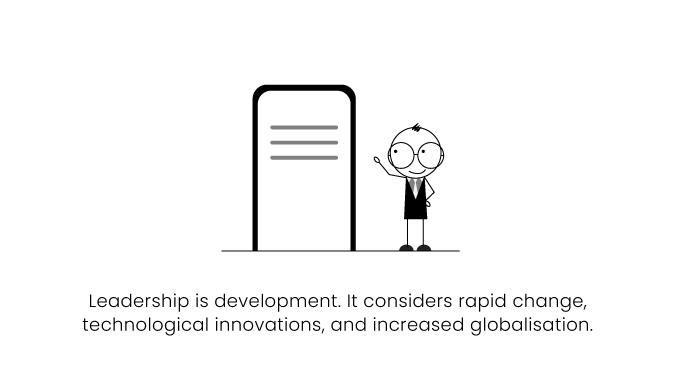 This theory of leadership evolved in the 1990s and is considered the New Era of leadership theories. Today’s researchers believe that one dimension of leadership isn’t enough. It cannot cover the complexity that arises in an organization.

Earlier approaches were traditional and based on leader-follower influences and interactions. However, contemporary theory focuses on more complex dynamics of interactions and situations.

This theory addresses various contemporary leadership theory approach such as - 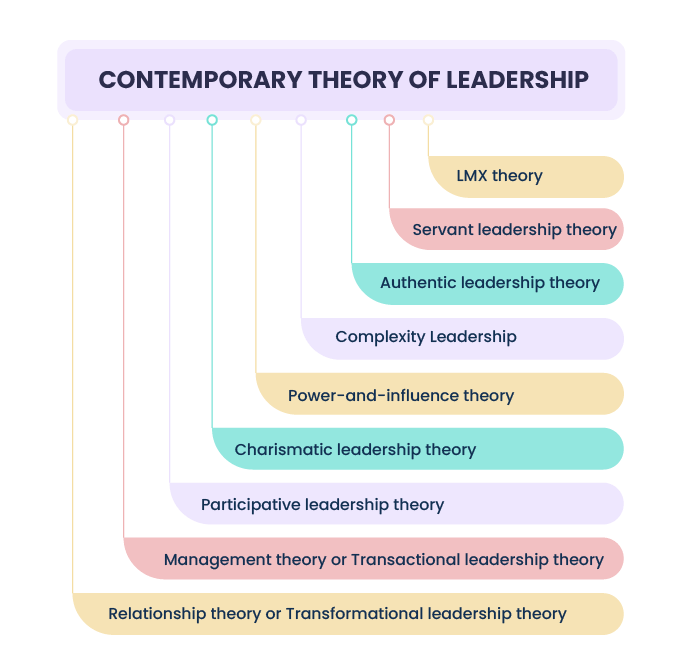 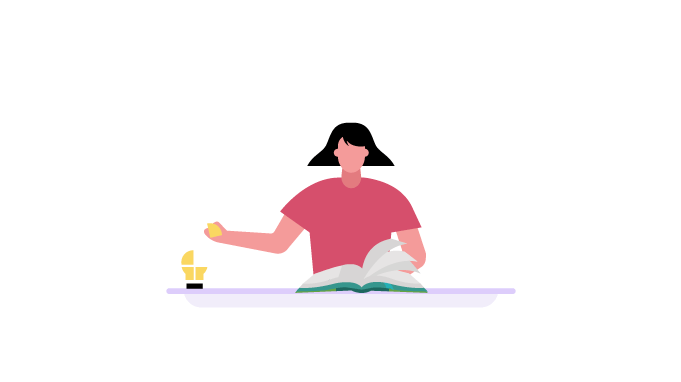 Now that you know the theories of leadership, you can start to put them into practice.

Here’s where the real hard work comes in.

How do we use these theories to help build relevant models of leadership competence? 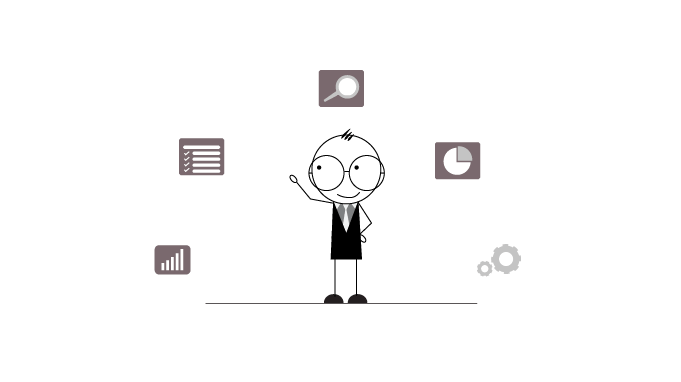 However, there may be times when you find some method not working for you. It is fine. Perhaps you need to modify them, or you may even decide that something on the list does not fit your leadership style. This process allows you to experiment with what does and does not work.

However, why should you care about all these different leadership theories if you already subscribe to one?

Even if you believe in only one particular leadership theory, knowing what options will prepare you for different situations. Not only that, but you’ll be able to interact more easily with other leaders who may practice a different leadership theory or approach.

The second reason is that every employee responds to different approaches.

Some do better with a more direct guiding hand; others find motivation in the decision-making process. As a result, having only one leadership style or theory of falling back on when evaluating your next project is a very limiting leadership practice. If you want to make the most of your team as it grows and changes, you must have as much knowledge as possible at your disposal. 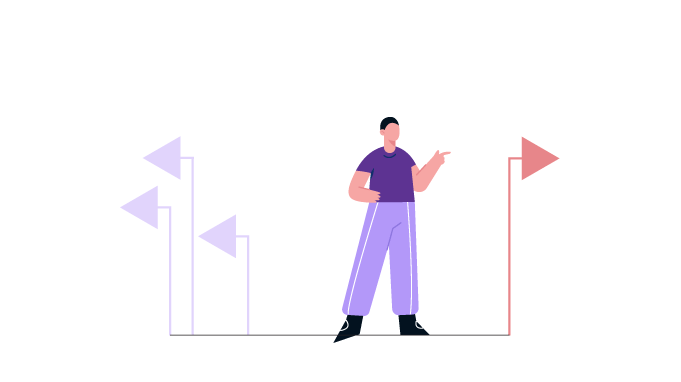 A leader is crucial to the success of every team. Without a leader, nothing will ever run smoothly.

So, what makes leaders who they are? Why are some people elected as managers and presidents while the rest remain followers? Leadership theories are developed to find answers to these questions.

There are many ways of defining leadership. Some leadership theories explain what differentiates a leader, while some explain how great leaders come to be.

When you learn about leadership theory, whether it is from us or another source, you read materials that make putting leadership theory into practice a validating experience, even to new leaders.

So, when it comes to putting leadership theory into practice, remember that the onus is on you. It will help if you read responsibly.

What does this mean?

You need to pay attention to what you are reading, take actual or mental notes on what you find useful, and then figure out how to put it into practice.

Though this article gives you practical tips, you need to try them out to see if they work for you and modify them as needed. Otherwise, they are just words on a piece of paper or a computer screen, or a phone. In short, you need to act and put whatever theory resonates with you into practice. 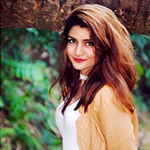 This article is written by Tanya Ahmed, a Digital Marketer of Vantage Circle, a cloud-based employee engagement platform. She is a leadership enthusiast with a post-graduate MBA in Leadership from Queen Mary University of London. Her experiences range from various fields, including Customer relationships, Content Creating, Sales and Marketing. For any related queries, contact editor@vantagecircle.com. 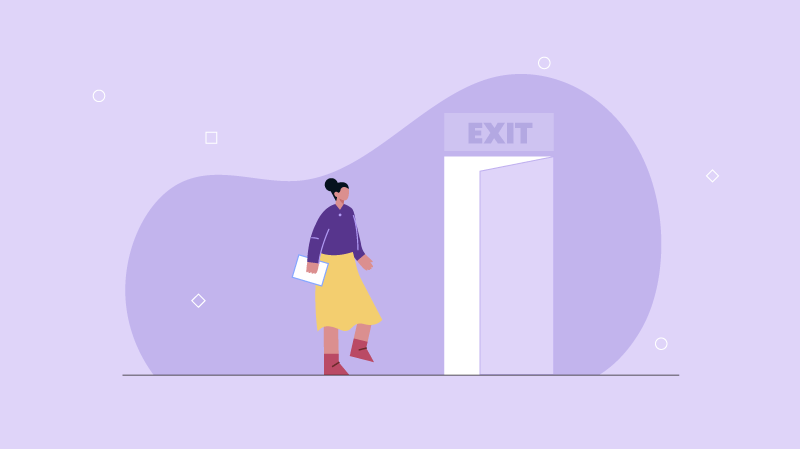 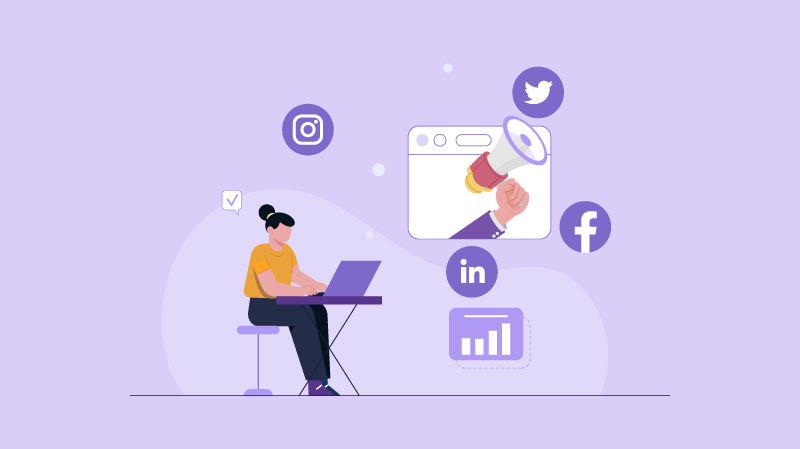 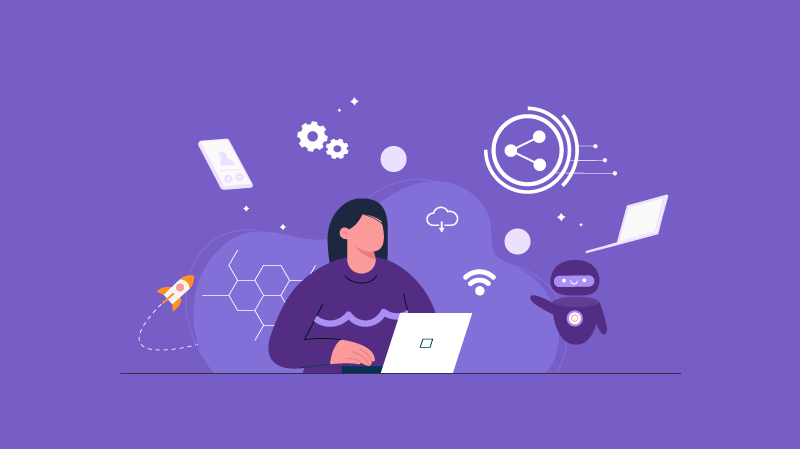 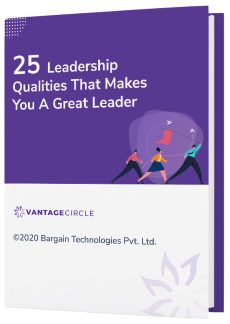